Ionospheric Response to the Solar Eclipse on 21 August 2017

Solar eclipses are always fascinating events for all people having the opportunity to experience it directly. For atmospheric scientists solar eclipses are huge active experiments for studying the response of the Earth’s neutral atmosphere and ionosphere on the well-defined turn off and on of the solar illumination. This will be also the case for the solar eclipse over North America on 21 August 2017. Coordinating and networking of different types of sounding techniques will provide new insights into the dynamical behavior of the Earth’s atmosphere and ionosphere in the course of the totality [1-5].

NASA created a special website to provide a guide to this amazing event (https://eclipse2017.nasa.gov/). The solar eclipse path over North America on 21 August 2017 is seen in Fig. 1 and more detailed on NASA's webpage. As Fig. 1 shows, the eclipse occurs between 16:50 and about 20:00 UT, starting over the Pacific then moving towards Northwest America then crossing US towards Southeast. Outside the totality zone the shadow of the eclipse will be visible in varying degrees all over North America. Considering the obscuration function of the sun during the eclipse, the solar irradiation will be switched off and on in a well-defined manner.

Due to the close coupling of the solar illumination with photoionization processes in the Earth’s atmosphere the ionization level follows the obscuration function principally but with a certain delay ([1–5]). We are able to show the behavior of the global total ionospheric ionization by monitoring of the total electron content (TEC) of the ionosphere via the Ionospheric Monitoring and Prediction Center (IMPC) of DLR (http://impc.dlr.de/) in near real time (delay 5 min).The DLR service uses 1 Hz streaming mode GPS measurements provided by various GNSS data networks such as the International GNSS Service (IGS),EUREF,ASI,TrigNet and UNAVCO distributed via several NTRIP Casters including the services of BKG Frankfurt. Here we present the actual global TEC map (see Fig. 2) and the related differential TEC map (see Fig. 3) obtained by subtracting 27 days median from the actual TEC map values on 21 August 2017. Both animations enable the visitor to see the reduction of ionisation due to the solar eclipse in comparison with the occultation function (see Fig. 4). From the scientific point of view thesolar eclipse can be considered as an active experiment with a well-defined variation of the solar illumination as discussed in earlier publications [2-5]. The dependencyofthe locally observed TEC from thesolar illuminationcan be observed by monitoring TEC and deviation from the mediansinside the totality zonein relation to the local obscuration functionas shown in Fig. 4.

Since the eclipse impacts ionization of all ionospheric layers it is expected that also the bottomside ionosphere changes rapidly with the eclipse. Accompanied VLF propagation measurements indicate some changes of signal strength and phase during the eclipse event. DLR just establishes a Global Ionosphere Flare Detection System (GIFDS) that will be ready this year [5, 7]. TwoGIFDS receiving sites are situated in the area of partial obscuration, one hosted by the WAAS Lab at the Stanford University and one by the Institute for Scientific Research at the Boston College (see Fig. 5). The following two figures show the VLF signal strength of various transmitters received by GIFDS. The data has a resolution of 1Hz and an update rate of 5 minutes.

We extend our sincere thanks to all the people behind the NTRIP data services of ASI, BKG, EUREF, IGS, TrigNet and UNAVCO for providing us high rate GNSS data in real time and the NTRIP caster software. We also highly appreciate the support from the WAAS Lab at the Stanford University and the Institute for Scientific Research at the Boston College for hosting and maintaining both GIFDS stations. Finally, we like to thank the scientific community and our followers which are highly interested in our work and results and motivate us to improveour products and services.

US TEC data material is based on UNAVCO GPS data stream services provided by the UNAVCO Facility with support from the National Science Foundation (NSF) and National Aeronautics and Space Administration (NASA) under NSF Cooperative Agreement No. EAR-0735156.

Figure 2: Animation of global TEC maps of the last six hours on the eclipse day. The white dots represent the ionospheric piercing points related to the measured GNSS links. For further details on TEC mapping see [6]. 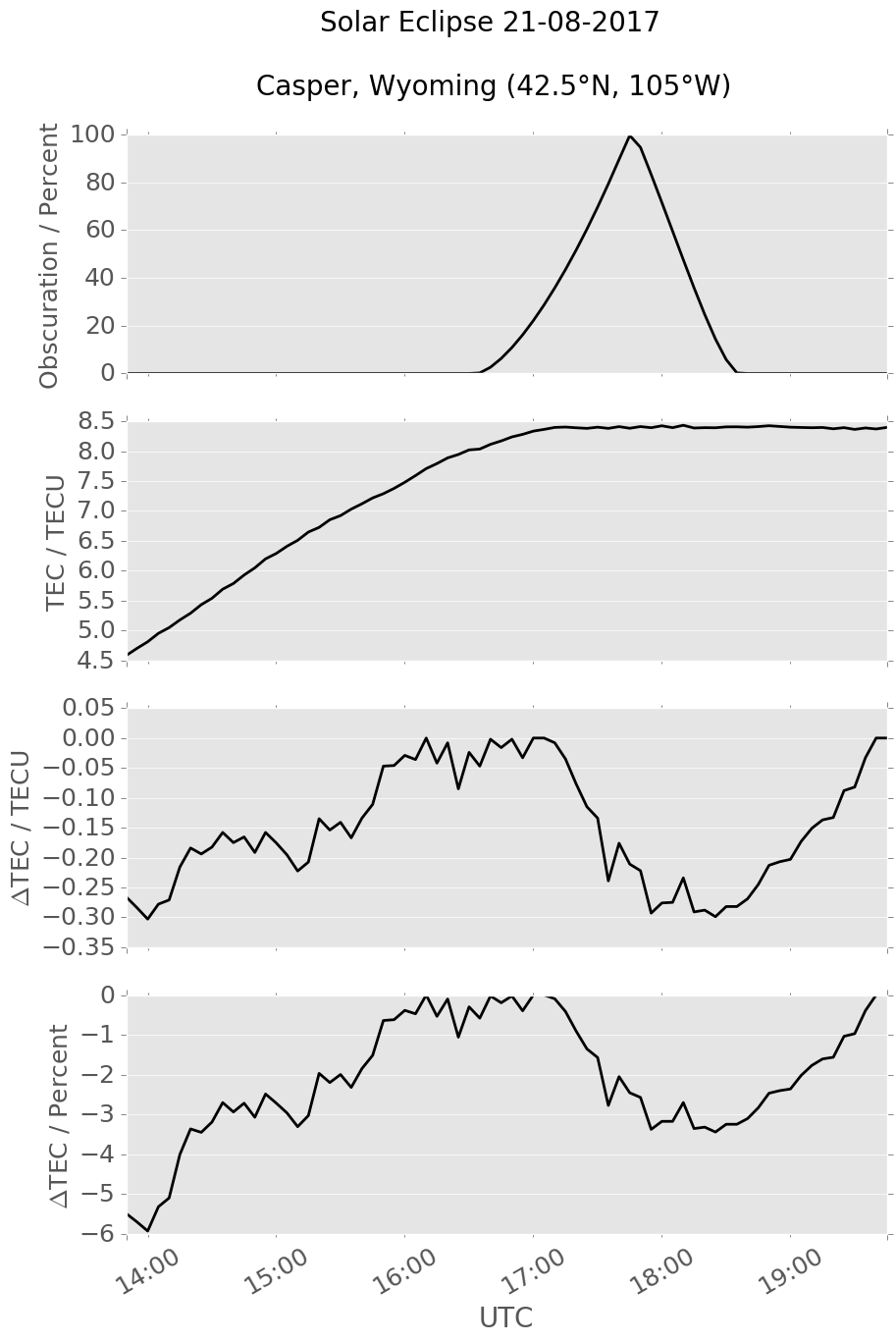 Figure 4: Obscuration function of the sun in the totality zone near Casper, Wyoming (42.5°N; 105°W) and the related TEC.

Figure 5: Geographical distribution of the two GIFDS stations and associated VLF paths expected to be affected by the solar eclipse on 21 August 2017. The VLF transmitters are marked by blue squares.

Figure 6: VLF amplitude measurements recorded in Stanford. The gray-shaded area shows the times of obscuration for Stanford only. Due to long VLF propagation paths crossing other parts of obscuration, the actual impact on VLF signals may vary.

Figure 7: VLF amplitude measurements recorded in Boston. The gray-shaded area shows the times of obscuration for Boston only. Due to long VLF propagation paths crossing other parts of obscuration, the actual impact on VLF signals may vary.